Posted at 11:47h in Blog, On A Meander, Wildlife by WebAdmin 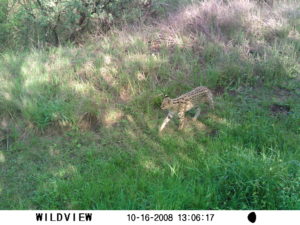 The Serval, according to the guide books, is apparently a completely nocturnal animal. Yet as with all books there are exceptions and the Giant’s View Serval have been seen on numerous occasions during the day. On one such occasion while lounging on the porch and enjoying the noon-day sun I witnessed a serval casually walk into the yard, searching for prey among the summer flower beds. The gardener was minding her own business cutting away brush and watering the grass, totally unaware of the cat a mere 10 meters from her.

“Servals are generally shy, retiring cats, hiding up during the day in reedbeds, tall grass and scrub bush.”

Completely unperturbed the serval walked around her, not really bothering to stay out of site. In my limited knowledge of this particular serval, it did appear that these two were well acquainted with each other, or at the least the serval with the gardener.

We are now quite sure that we have at least two serval on the property who we see regularly. Using pictures from the wildcam we have been able to identify them using tail markings. The pictures are not perfectly clear but we have seen them enough to begin to identify them.

Servals are generally shy, retiring cats, hiding up during the day in reedbeds, tall grass and scrub bush, pretty much exactly the habitat found on the flood plain. With the rehabilitation occurring soon, this habitat will increase and improve the hunting in the area as they generally eat birds, small mammals and on occasion small duiker. 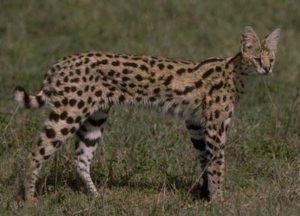