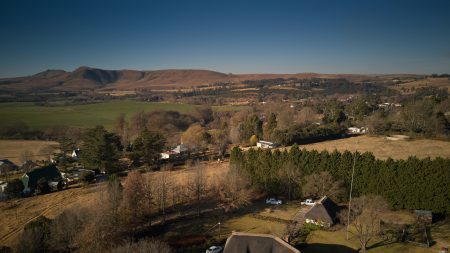 Posted at 12:21h in Blog, Drakensberg by Giants View Estate

Looking west from Giant’s View Estate reveals the iconic mountain peak which gives the Estate its name and which is part of the Drakensberg mountain range. These mountains play an important role in the prehistory and history of KwaZulu-Natal; they were home to many Later Stone Age hunter-foragers; they gave a refuge to families fleeing from Shaka’s warriors; the Boer trekkers descended a northern pass to gain access to the farms on which they settled across KZN.

And much further back in time, the mountains were formed by erosion following the breakup of the supercontinent Gondwana. They are in fact an enormous escarpment capped by the remains of the lava which poured out across parts of Gondwanaland in the Early Jurassic period. It is fascinating to walk up into the Little Berg, foothills of the main escarpment, and consider the aeons of time that have passed in the development of the surrounding landscape and the part played by wind, weather and water in the changes.

On the 19th October 1903, a notice was issued by the (then) Natal colonial government that proclaimed the establishment of a game reserve in the area of Giant’s Castle. This was the first portion to be protected in this way, the beginning of what became the vast UNESCO World Heritage Site known as the Maloti-Drakensberg Park, which is a transnational property composed of the uKhahlamba Drakensberg National Park in South Africa and the Sehlabathebe National Park in Lesotho. (www.whc.unesco.org ).

Today the mountains are protected to conserve flora, fauna and cultural history, as well as the vital water catchments they contain. They provide an invaluable wilderness experience to those looking for unspoilt natural beauty and the challenges of hiking and mountain climbing.

Giant’s Castle Reserve is easily accessible from Giant’s View Estate; there are two routes but road conditions should be checked. One route is through the centre of Mooi River village and the other follows the road up through the Kamberg Valley, past the turns to Kamberg and Highmoor Nature Reserves, over a small pass and on to meet the Mooi River road.

The Reserve is open to day visitors but also offers a hutted accommodation “camp”  (book through http://www.kznwildlife.com/accomodation.html ). Maps of hiking paths are obtainable from the shop at Giant’s Castle Camp, where there is also a restaurant. There used to be a number of mountain huts for the use of hikers who wished to overnight in the mountains, but it is understood that these were all removed some time ago by Ezemvelo KZN Wildlife, although Bannerman’s Hut is referred to in the tariffs on the website. This means that hikers have to carry tents if they are going to be out overnight. A hike up from the Camp to the contour path gives participants the opportunity to walk further north towards Injisuti or southwards towards Lotheni, or climb to the top of the escarpment via Giant’s Castle Pass or Langalibalele Pass.

Hikers, whether on a day hike or camping overnight, must complete the Mountain Register at the Camp office before leaving to walk (and remember to please sign again on returning). The Register provides details of the direction taken and the plans for the hiking party; this provides information should a rescue be required. Even the most experienced hikers can experience a mishap resulting in injury, or become lost if the weather changes. Hiking groups should number at least three; should one be injured it is then possible for one to stay with the injured person and one to return to call for help, but four or five people together is a better plan. Cell phone reception is extremely poor in the Drakensberg and should not be relied upon.

It is important to remember that the weather in the mountains can change at any time, so it is critical to carry warm clothing even in summer, and rain gear at all seasons. Snowfalls can happen at any time of the year. In summer, intense storms with lightning and hail can develop very quickly and the torrential rain can turn small streams into dangerous rivers in the steep terrain. Sunburn at this altitude, too, is a danger for exposed skin and protection should be used. A cardinal rule is to always carry drinking water and to wear a sun hat. Please wear comfortable, tried-and-tested hiking boots; it is likely that you will walk further than you had thought when you set out.

Mountain hiking is not the only activity to be enjoyed at Giant’s Castle. There is good fly fishing on offer in the Bushman’s River which rises high above and flows down past the Camp. Wild flowers abound, especially in spring and early summer and bird-watchers will not be disappointed. If you are able, carry one or two good field guides to mountain flowers and birds when you walk as it will enrich your visit. The Park is the home of a renowned “Vulture Restaurant” where a limited number of visitors can enjoy watching Lammergeiers and other vultures from a specially designed hide. There is a waiting list for this viewing however, so it is essential to book in advance (email bookings@kznwildlife.com ).

The Camp restaurant used to be well-known for viewing eland as there were a number of these beautiful antelope which were so used to visitors that they spent a good deal of time in the area below the restaurant deck, grazing along the river bank or resting in the grass. It is hoped that their offspring are still at home there.

Langalibalele Pass was named after Mthethwa Langalibalele, the king of the AmaHlubi people who had been permitted by the colonial government of Natal to settle in the Drakensberg foothills to provide a buffer between the colonial settler farms and the Bushmen people. The Bushmen, sometimes referred to as San, were First People in much of sub-Saharan Africa and led a forager-hunter lifestyle before the arrival of colonial settlers and the destruction of the game animals on which they depended. They proved to be adept at stock-raiding, which put them in direct conflict with the new settlers.. Unfortunately a dispute arose in 1873 between Langalibalele and the Natal colonial authorities and an order for the arrest of the king was issued. As a result, he and his people fled up through the Bushman’s River Pass into Basutoland (now the Kingdom of Lesotho). Ultimately he was apprehended, underwent a most infamous trial and was then imprisoned on Robben Island for about two years. Although Langalibalele’s actions were referred to as a “rebellion” this was hardly the case and his treatment and imprisonment were opposed by a number of important citizens who made representations to the British Government, and ultimately by the Prime Minister of the Cape Colony under whose jurisdiction Robben Island fell.

Modern visitors will probably find it hard to imagine troops of soldiers and their horses pursuing anyone up the steep passes, but catching a glimpse of the vanished Bushmen is assisted by a visit to the Main Caves Museum. This is a guided visit which must be booked at the Camp office as limited numbers are allowed in at any one time. A viewing deck allows visitors to see at close quarters the paintings made by Bushman artists over centuries, The Drakensberg Park has hundreds of rock shelters bearing paintings but these are protected and only a small number of sites are officially open to the public. There is also a guided walk to Game Pass Shelter in Kamberg Reserve but that is a much more strenuous climb than the easy walk to Main Caves.

On a Meander > Giant’s Castle