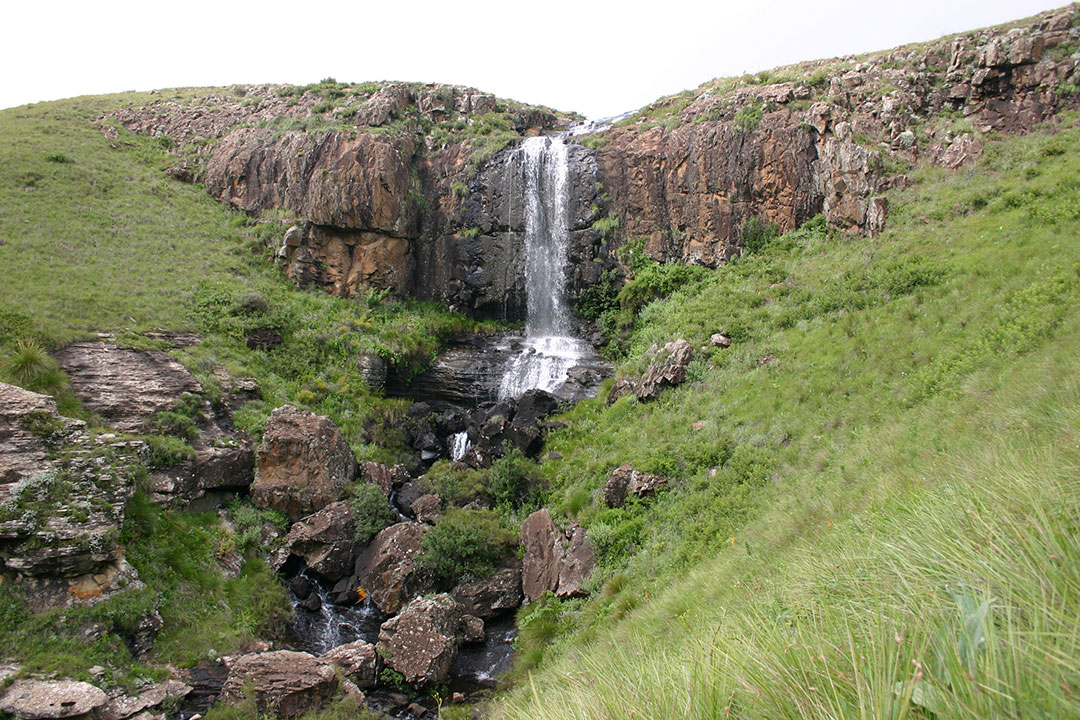 Posted at 08:28h in Drakensberg, Things to do by WebAdmin

To a casual observer looking at a map of the Ukhahlamba Drakensberg Park, Highmoor Nature Reserve might seem to be rather unexciting, a small corner of the Park tucked into the elbow of Giant’s Castle Reserve and away from the challenging heights of the main escarpment. However, the truth is that Highmoor offers an almost endless list of attractions and possibilities for all kinds of visitors, and it is so easily accessible from Rosetta that it is like a gift to residents at Giant’s View Estate.

In the long past, evidence of occupation by the San (Bushmen) is provided by a rich record of rock paintings at sites all around the Reserve and it was in one of these that the first examples of art mobilier in the Drakensberg region were found. Art mobilier refers to paintings that could be carried (as one smaller stones) rather than the walls of rock shelters or pieces broken therefrom. So Highmoor holds a unique spot in the archaeological records.

But quite apart from that, it is a place of renown for trout fishermen, with a series of small dams dedicated to fly fishing and the location of these on a mountain-top adds to the ambiance, especially when the mists drift over the moorland and water, it is easy to imagine being in Scotland or somewhere similar.

The dams are within easy reach along well-defined paths from the parking area at the Reserve office, where there are the original old sandstone horse stables and other buildings from the era when the station was established by the former Department of Forestry. Under former governments, much of the land along the Drakensberg escarpment was held and administered by that Department; however, plantations were not established at Highmoor and it was retained for water conservation and weather observation. Indeed there are trees, but these are shade trees planted around the office area to provide perfect picnic areas and safe spaces for children to play, and out in the Reserve, indigenous trees grow in sheltered areas in the valleys and there are patches of naturally-occurring protea species on the hillsides, notably above the entrance road from the gate and continuing up to the office parking area. 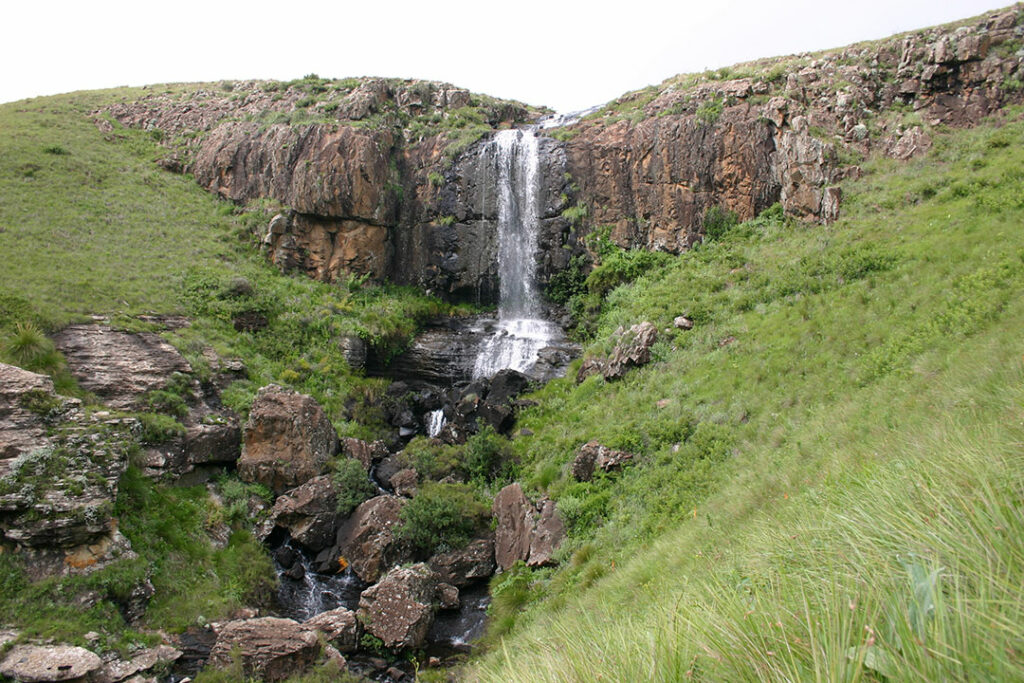 The park has a grassed camping area which has a block with toilets and hot showers but no other accommodation is available. Due to its proximity to Rosetta, this is not a problem for visitors from Giant’s View as it is so easy to have a wonderful day out and return home without a long drive. And it is possible to have a celebration day by booking a special lunch or dinner at Cleopatra Mountain Farmhouse (tel. 033 267 7243 or +27 71 687 7266; email cleopatramountain@telkomsa.net ) and including sundowners at Highmoor, the entrance gate to which is very close to the Hotel. They also have a coffee shop; due to Covid restriction requirements, it is advisable to contact them for any reservations in case they are booked to capacity.

Highmoor offers so much to visitors, including relatively easy walks in mountain terrain, following the old jeep track from the office area, and continuing past the path turning off to the trout dams. The mountain top area is a wide undulating landscape with high-level views of the escarpment above Giant’s Castle Camp to the west; looking to the south there are many ridges marking the deep valleys of the rivers flowing out from the mountain catchment: the Inzinga, Mkhomazi, Lotheni, and uMzimkhulu – if one could see that far. Breath-taking, ancient country if one considers its formation over the eons since the breakup of the old supercontinent Gondwana.

If one follows the path past the trout dams and continues over the rise to the northeast, there are views over the wetlands of the Hlatikhulu area. This is roughly in the direction of a possible sleep-out cave at Aasvoelskrantz which can be booked through Central Reservations (tel. 033 845 1000). The cave is also a great place for a family picnic as it is an excellent walking distance for active young people, has a beautiful waterfall, and looks out over a steep drop. The other sleep-out cave at Highmoor is Caracal Cave, also on the northern side of Highmoor but somewhat further west towards Giant’s Castle. Sleeping out in a mountain cave is a magical experience! 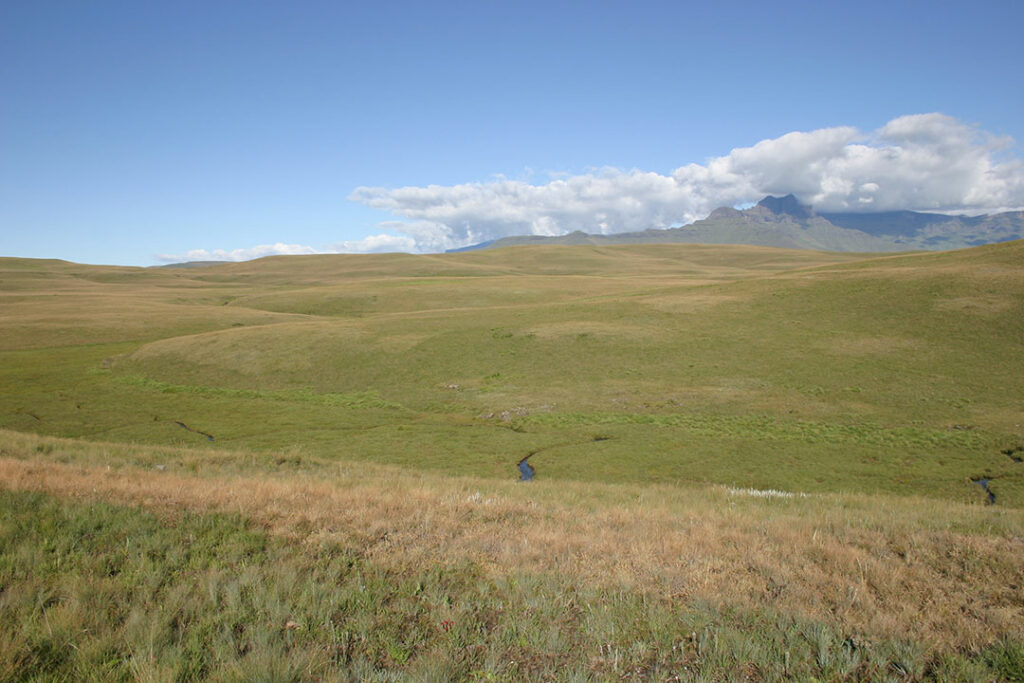 There are a number of waterfalls within the Highmoor area, with one hidden just beyond the gate to the jeep track. The stream, the beginning of the Little Mooi River, feeds a couple of the trout dams before plunging down a series of rock slides and a final fall into the deep gorge beyond the office and residence area fence line. A spectacular viewpoint can be reached by turning right and following the fence immediately after going out through the gate, just before the turn onto the path to the trout dams. The edge above the rock slides and fall is not protected in any way and it is not a suitable area for young children unless under careful supervision.

Highmoor in fact is a contributor to a number of river catchments and the source of two rivers, the Little Mooi and the Cascades which joins the Little Mooi further down in the Kamberg Valley. It also contributes directly to the catchment of the Mooi River which flows past Giant’s View Estate and which is ultimately a natural tributary of the Tugela, and through water transfer schemes, contributes to water for Pietermaritzburg and Durban. Part of the Highmoor catchment feeds the Ncibidwane River which is a tributary of the Bushman’s River flowing down from Giant’s Castle itself.

A short walk along the jeep track as it heads south from the office area leads up a slight rise; further on the track crosses a flat wetland area which drains to the east, flowing down into the Cascades valley. If one keeps the fence line to the left and follows the rise eastward, the Cascades waterfall comes into view. The valley is quite steep sided but those fit enough can follow the stream a little further down where big boulders in the bed offer a place to sit and enjoy the rushing water in a remote and unspoiled place.

A longer walk, this time taking a right turn after crossing the wetland and following a less-well-marked jeep track to the west, goes to a point where there used to be a plaque marking the declaration of the whole Drakensberg Park as a protected wilderness area, long before it was declared a World Heritage Site. The plaque may no longer be there but it stood where the track tops the small ridge looking directly across Giant’s Castle at the great escarpment wall, and the views are magnificent, north and south. A path leads down from there and crosses a narrow neck of land with the upper catchment of the Mooi River to the south and a beautiful fall of water into the Ncibidwane to the north. A desirable hike for those fit enough would continue on into the Giant’s Castle Reserve area and down to the Camp, but this would require transport to collect the hikers at that end. 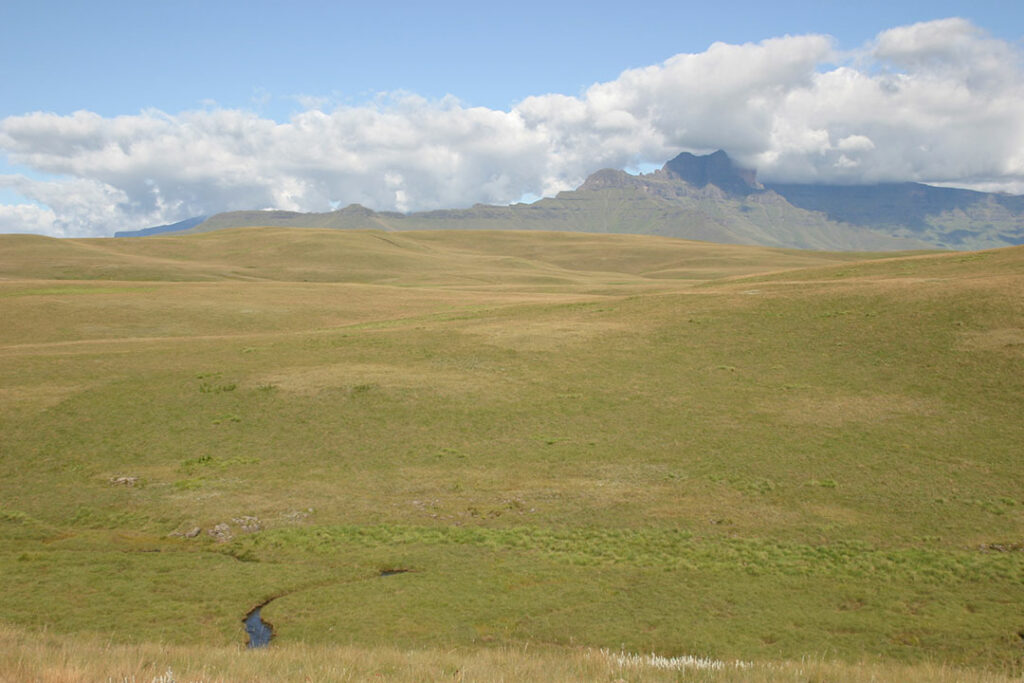 Similarly, it is possible to walk all the way south along the track from the Highmoor office and descend into the Mooi River valley and follow that down to the camp in the Kamberg Nature Reserve.

Thus Highmoor offers short easy walks, longer more challenging ones, great fishing, wonderful flowers in the grasslands in spring and summer, and spectacular views for photography and painting and sheer enjoyment. But it should always be remembered that there can be danger in both the weather and the terrain. When thick mist descends on the moorland, it is easy to lose direction and there are sudden precipitous drops. The escarpment generates thunderstorms in summer and these can descend on Highmoor very quickly in a fury of lightning, torrential rain and hail. Similarly there can be strong winds and sudden drops in temperature. So it is prudent to watch the weather and always carry protective clothing and a bottle of drinking water at the very least.